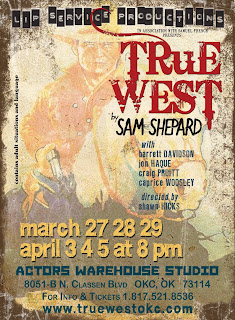 Last weekend, thanks to my sister, I had the fortunate opportunity to see Sam Shepard's True West performed live in Oklahoma City. The local Actors Warehouse Studio staged the performance and the cast was outstanding.
If you haven't seen or read True West, and I hadn't, it is both painful drama and painful comedy. I don't say such disparagingly, rather that it makes you laugh in a dark way and touches on the rather remote parts of your emotions too.
Jon Haque and Barrett Davidson, in the two lead roles, were simply amazing. The play demands an exciting level of physical acting and they delivered without hesitation. I can say, having watched from the front row, I don't know how they could possibly have done another performance the next day. I was tired just having watched them.
It's also fair to state, and if your familiar with the play you'll understand this, I'm not having toast for some time.
I'm glad to have found a new venue to watch live performance at Actors Warehouse Studio. If you haven't been, make certain to follow their upcoming calendar to check out this gem in Oklahoma City.
Posted by CM at 1:40 PM 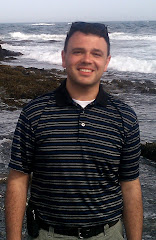